From the Chicago Reader, February 4, 1994:
ON THE BRINK OF ABSTRACTION: JULIA FISH

at  Feigen, through February 19

There is an aggressive, even imperial aspect to mainstream Western art. From the monumental equestrian statue that etches its man-atop-horse form into the sky to Jackson Pollock's huge drip canvases, large enough to seem alternative landscapes, artists have placed an assertion of the human personality  their subject's or their own  at the center of their works.

In our century a different tendency has emerged, most often in the work of women artists. In the abstract paintings of Agnes Martin, Helen Frankenthaler, and Mark Tobey, in the gentle interiors and star paintings of Vija Celmins, and in the observational street photographs of Helen Levitt, one finds artists less interested in asserting their identity and not interested in remaking the world. The viewer is asked to focus less on grand themes  a victory in battle or the outline of a subject's soul  than on tiny and apparently insignificant details. The artist who concentrates on minor variations in pale colors placed between ruler-straight lines or on the momentary poses of street kids offers no explanation for the order of things, no heroic imagery. But this apparently narrower focus can offer a complete vision, one asserting that it is not given to humans to rule or even understand the whole word  that we can realize our best selves through a double journey, one that marries external observation with inner vision.

I was not surprised to learn that Julia Fish cares very much about the work of Martin, Tobey, and Celmins, among other 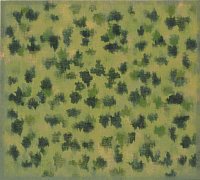 painters. Her recent paintings and drawings, seven of which are currently on view at Feigen  together with five 1991 works in a downstairs office  have simple subjects. But the longer I looked, the more my experience of them deepened. I was led less to identifiable themes, a definitive "vision of the world," than to a deepening of my own inner awareness.

Fish's paintings have simple titles that do no more than modestly name the subject that inspired them. Ivy is a green rectangle inside a slightly darker border, within which float leaflike shapes. Fuzzy at their borders and lacking precise details, these are hardly anatomically correct leaves. Many are partly covered by gray-green blotches that could be mistaken for areas where the paint has been partly scraped away, dulling the color. Much of the work's power stems from such ambiguities. The leaves hover against a green background, sometimes seemingly in front of it, sometimes sinking into the dense green.

Flurries is my favorite work of the twelve. White flakes are set against pale blue, again surrounded by a thin framelike band. 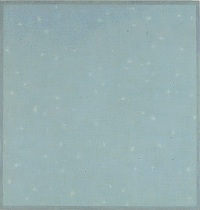 Though the title suggests falling snow, there is no illusion of movement; the viewer is suspended in time.

The apparent simplicity is deceptive. The blue background is actually complexly textured, with patches of green and lighter blue; behind it lie hints of tan, green, and yellow. Fish paints very slowly, building her surfaces out of translucent layers of oil paint. Thus the perceived depth effects in her work are not created by the "tricks" of Renaissance perspective but by piling up layers of paint  a technique that, in different forms, is as old as van Eyck. But if layering in van Eyck creates hyperreal colors, Fish's colors are more tenuous, ethereal, changeable.

The subject-background relationship in Flurries is similarly ambiguous. The white forms are not discrete; while their edges don't exactly bleed into the blue, they aren't utterly separated from it either. The pale blue itself seems suffused with white. As a result, it seems wrong to call the flakes the "subject" and the blue the "background"  they are equal partners in an amazingly gentle balance.

In many Renaissance portraits, perspective is used to articulate a relationship of dominance: the wealthy merchant is shown against a window-view of his city, which seems subservient to his controlling gaze. Fish has (as have many of her colleagues) rewritten the power relations inherent in the traditional painting of figure and ground. Snow and sky are equal but not merged; the viewer can see one and then the other as foreground, and then see them both on the same plane. After several minutes of viewing, the picture presents all three possibilities at once. It is quiet yet alive, still but not static. I felt the "still active equilibrium" Fish says she seeks.

Several of the paintings can be read in alternate ways  Flurries as stars, Tide as a hilly landscape framing a mottled, multicolored sky. The interplay between definite if indistinct forms and Fish's variegated surfaces captures what Fish calls her "negotiation" between abstraction and representation. The viewer stands as if on a threshold, looking inward and outward at once: the external world constantly hovers on the brink of abstraction, yet never disconnects from its roots in nature.

Fish, 43, grew up in a tiny town on the Oregon coast. Her parents encouraged reading, drawing, and music and chose not to have a television. She remembers "the tall forests and the Pacific horizon line" as formative presences. Additional painting influences have included Romanesque mural painting, Mondrian, and Monet. On first arriving in Chicago in 1985, she made paintings based on her memories of Oregon landscapes. More recently, Fish, who is a professor of art at the University of Illinois at Chicago, has taken inspiration from local sights.

Walk appears to depict rectangular paving stones or perhaps an indoor tiled floor. Dark brown lines divide the tall rectangle of the canvas into smaller, lighter brown boxes. No box is perfectly rectangular, no line perfectly straight. The lines meet at slightly skewed angles; they sometimes widen slightly around such intersections. The central contrast is between geometric order and organic irregularity. Though the picture seems dominated by its geometric configuration at first, it is the tiny deviations that become most striking. What becomes strangely moving in this work is the subtle difference between an 89-degree angle and a 91-degree angle  a far cry from the grand gestures of Renaissance battle paintings or of some modern abstract canvases.

This is not a narrowing of focus but rather a redefinition of what it means to be human. Our attention should be directed not toward remaking the world in our image but toward discovering the possibilities for spiritual redemption in observations of the simplest of things. I was reminded of William Blake's line " To see a World in a Grain of Sand."

Each of her four Garden drawings on view are black-and-white clusters of diverse biomorphic forms. While Garden #1 has empty space between the shapes, the others are more densely packed; in Garden #23, shapes are superimposed on each other and virtually no white paper is visible. These improvisations on plant shapes are highly suggestive  a garden of the imagination. These drawings are made on paper printed with a grid apparently intended for Japanese calligraphy practice. While the regularity of the grid makes an interesting contrast with the garden shapes, I also thought of the long connection between calligraphy and landscape painting in Japanese and Chinese art. Learning calligraphy was thought to be the beginning of all artistic training, even more than figure drawing was for Western artists; a close examination of older Japanese paintings shows how much the brush strokes owe to calligraphy. The implication is that Fish's shapes might form a new vocabulary.

Downstairs are four untitled "water drawings." Similar in most respects to the Garden works, they are on unlined handmade paper, and the shapes are much simpler  short, wormlike oblongs. As in Walk, I sensed momentous implications in tiny variations between shapes. Yet while focusing on tiny variations, I felt my mind starting to clear of all the usual preoccupations  money, friends, sex, the future, the budget deficit, the death penalty. To quote Fish, everything became "very still," and I was transported to a rare, silent place. Later, I recalled having seen four amazing "Seasons" landscapes by the great 15th-century Japanese landscape painter and Zen monk Sesshu. While they depict the visible world with great skill, the longer I looked at them, the more that world seemed to melt away  as if the differences between rocks and trees, or between one season and another, were mere transitory phenomena hiding deeper truths. Any skillful painter can depict the visible; it is a rare one who can take us beyond the visible.