Ever since Cézanne first created an art based on an ongoing investigation of perception and unresolved tensions between representation and abstraction, artists have been creating works that present themselves less as answers than as questions. Artists from Marcel Duchamp to Jasper Johns have created works that embody contradiction rather than seek resolution. Three issues that have long bedeviled twentieth-century art — the quest for originality, for ideal forms, and for aesthetic beauty — are presented in Rainer Gross' "Twins" series. Gross' works are originals and not; they suggest the purity of geometric abstraction and its opposite; they are visually seductive, and destructive of seduction. Their extraordinary power comes in part from their perceptual complexity, in part from the unanswered and unanswerable inquiries they initiate, but perhaps most uniquely from the way they express linked themes, tied together as intimately as the subject and countersubject of a fugue.

The viewer encountering the "Twins" for the first time may find them a bit disorienting. In each, two canvasses, identically sized and with similar designs, are hung side by side an inch or two apart. Though they appear somehow related, the designs are not the same; these are not identical twins. Yet lines and colors echo almost uncannily from one to the next, repetitions too close for them to be "fraternal" twins either. If you spend enough time looking, you'll see that if one panel is rotated 180 degrees, it becomes an approximate mirror image of the other. But still they will not be exact reflections. A red square in one will be almost entirely absent from the other; a blue and lavender area in one will be almost entirely blue in its counterpart. They seem to have geometrical designs at their root, mostly of straight lines and rectangles that have then been somehow distressed. Paint is flaking off everywhere; thick flakes of one color will be superimposed on another color. One soon begins to wonder how were they created.

Gross begins with a canvas to which he applies pigment mixed with water, painting geometrical designs whose hand-limned edges are not exactly straight. He then applies oil paint — sometimes a single color; other times a related design — to a second canvas, pressing them both together while applying pressure. Some areas of pigment will come off onto the oil, obscuring it; in other places the oil will cover the pigment. These transfers occur unevenly, so that an area of peach, for instance, may become irregularly flecked with blue. A further complication is that sometimes one side has been painted in layers. Gross usually hangs them with the pigment half on the left and the oil half, inverted, on the right.

This flipping is deeply disorienting. When one studies a painting, one is inclined to search it for meaning. What knowledge, or what emotion, is conveyed by the adjacent presence of two differently hued blue stripes? The long history of abstract art, and of  the rhetoric around it, has taught us that all manner of emotion, or whole realms of spirituality, may be found in just such a 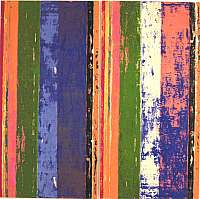 juxtaposition — or, at least, that the painter has intended to convey such possibilities. Certainly vision orients itself to particular arrangements of color. But then one looks to, say, the right-hand portion of Munteanu Twins and finds that two blue stripes in the left canvas are replaced by a mostly white one and a peach one that's extensively flecked with blue. Neither half is more interesting than the other, and one who understands each as a monoprint of the other one also understands that these works lie almost exactly between the original/multiple bifurcation: there can only be two of them, but neither is the "copy." Both are equals, and seen by themselves are incomplete.

Just as significantly, the automatic and partly random nature of the patterns created in the contact between the two halves fits within the recent tradition of artists questioning the power and meaning of their own gestures, doubting their ability to create original and expressive marks in our image-saturated age. Gross has removed part of his self from these, and that removal is also mirrored in the process he uses to select each title. The names are plucked randomly from a telephone directory, or, as he puts it: "like a scientist naming a new species". The implied reference to natural objects is appropriate to his process, through which the idea of the artist as creator of essential forms that will express ideal truths of the universe, in the manner of Malevich and Mondrian and even arguably an artist such as Sol LeWitt, is replaced by the artist as mediator between such forms and randomness, between geometry and nature.

One of Gross' smaller works, Danco Twins, has blue and red bands in both halves; they meet at right angles, set against a

yellow ground. Flip one of them in your mind's eye, and the colors mostly match up, thick blue 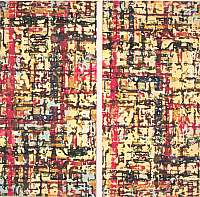 meeting thick blue and patchy red meeting patchy red. In time, one figures out which color was on which side, and where colors have come off onto others. These processes occur with much more variation in the large and complex Cristin Twins, where both halves appear as giant mottled grids. This early work in the series was created a bit differently than the later ones: both the pigments and then the oil paint were laid down on the left canvas, in different patterns. In the contact process parts of both layers have transferred to the right, leaving each half almost equally mottled. The work's dense details invite close-up inspection, and the viewer "lives," as it were, in various tiny yet lush flecks of paint, while also comparing the two halves, which helps one see the differences between them. In all of the "Twins," the comparison process requires the viewer to be actively engaged not just in sensual eyesight, but in a certain kind of "conceptual" looking as well, as one imagines the original orientation in the mind's eye.

Minute comparison only heightens one's sense of viewing decayed versions of rectilinear forms, ruined or transformed as if by erosion or oxidation. Yet little if any material is actually lost; paint that has dropped off from one area appears on the surface of another. Images have disintegrated, but in so doing have also partially covered others, linking decay and image-making. The "Twins" are a bit like lusher imitations of Mondrian that have been exposed to centuries of transformation, due both to erosion and to the accretion of new archeological layers.

These are also works that reward the viewer's close inspection. Gross often lays his rich colors down in contrasting bands, heightening each hue's sensuality — which, combined with the dense mottling, encourages one to almost live in the paint, finding as much truth in the jagged edges of each peeled-off area as one would find in a great work of geometrical abstraction. But rather than describing the progress of the mind toward some ideal perfection, the "Twins" mediate between ideal shapes and something more chaotic, something beyond the power of any single human consciousness to control or encapsulate. Indeed, Gross says that for him part of the excitement of creating these works is never knowing exactly what he will get as he pulls the two canvasses apart, however much he may try to control it. Standing between original and copy, difference and resemblance, order and chaos, the viewer is also situated between the Apollonian, structured beauty of intentionality — whether that of a controlled work of art or of a manicured picture-window view — and the elemental, chaotic beauty found in the patterns made by lichen, or the wearing-away of a wall poster, or the streaks and splotches on decaying movie film.

Finally, the curious viewer will try to figure out which portion of paint came from which half; implied in this attempt is the natural desire to reconstruct the original "ideal" forms. But this process also gives the "Twins" an additional conceptual dimension. The viewer who undertakes this detailed analysis will finally be thinking back to the moment of the "printing," of contact and

separation, that cataclysm that rent apart two well-ordered worlds while messily intermingling them. The right side of Angoma Twins, for instance, was solid white before contact with its counterpart, yet the resulting two halves are similar, white oil paint covering some areas of pigment on the left, just as pigment covers different areas of oil paint on the right. In those works in which the color has been layered, there are even points at which several layers of color have come off at once, leaving a bright dot on one side and bare canvas on the other.

In one of the lushest works, Munteanu Twins, we find white and peach stripes on its right canvas corresponding to the two blue stripes that occupy much of the right portion of the left canvas. A tiny, flaked piece of paint on the left contains both white and peach, the dividing line in the middle of the flake, a particularly striking opposition between geometry and jagged edges that encapsulates in a fraction of an inch much of what these pictures are about. This also indicates that the white and peach stripes were originally on the right. The viewer can then see that the blue that covers much of the lower half of the peach came from the left, and that in the areas of blue corresponding to solid peach, areas in which neither color has come completely off, there is a tinge of peach in the blue.

Trying to figure out what happened, to mentally restore the lost originals, only heightens one's sense of the way the imprinting process has irretrievably altered them. There is a raw and elemental quality to the "Twins" that recalls natural patterns of decay. It reminds me of one of my own deepest encounters with nature: a three-hour walk I took, following the length of the collapsed Nimitz Freeway in Oakland, California, a week after the 1989 earthquake. There were still a few unseen corpses between the crushed concrete, but what amazed me were the specific ways in which the carefully calculated Euclidean forms of the freeway — its perfect curves, its plumb-straight concrete supports — had been transformed into something else, something full of bends and twists and all manner of variegated patterns. One can see sights just as profound in every abandoned parking lot that is being reclaimed by weeds.