Home    Film   My Art    Art     Other: (Travel, Rants, Obits)    Links    About    Contact
Anthology Film Archives 2001 Film Preservation Honors
On March 20, I received an award from Anthology Film Archives. The text of the acceptance speech I gave is below the invitation card for the event, which appears immeidately below; click on any of the images of the card to get a larger, and more readable, image. The booklet printed for and distributed at the event, which includes the two articles of mine referred to in my speech, is available for purchase from Anthology. Fred Camper 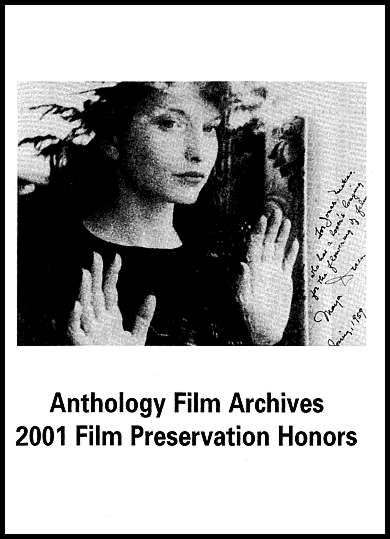 Below is the text of the acceptance speech I gave when receiving Anthology Film Archives' Film Preservation Award for 2001, at Water's Edge Restaurant, Long Island City. N.Y., March 20, 2001. When speaking, I made one or two brief interpolations, but the essence is the same.

I'd like to express my deepest thanks to Anthology Film Archives, Jonas Mekas, and Robert Haller, for this honor. For a freelance writer such as myself, the principal rewards are not monetary, and this recognition matters enormously. I also owe a deep debt of gratitude to the Chicago Reader and its editors. This publication, which has been my principal source of income in recent years, has not gone the dumbing-down route taken by so many periodicals. Still considering itself a writers' paper, it regularly publishes my sometimes lengthy, in-depth art and film reviews: some on obscure avant-garde films, even, in the case of Christopher Maclaine, on films almost a half-century old — because its editors judge submissions primarily by the quality of the writing, by how good a case the writer has made.

When Robert Haller phoned me to inform me of this award, my first question was what my work had to do with preserving film, the cause that brings us together here tonight. Mr. Haller explained, "You preserve film through your writing." I soon realized he had a point. Sadly, we lack the resources in this world to preserve every film, and so preserving any film involves a choice, and ultimately, a value judgement. The climate in which those value judgements are made is something that critics, in their way, contribute to.

I selected the two essays of mine that are in the book for tonight's ceremonies because I thought that they were decent examples of my writing, and that they concerned masterpieces — two films by Christopher Maclaine, and Stan Brakhage's Arabics — that are still all-too-neglected. But these films also highlight the problematical issues around film preservation.

Brakhage saw Christopher Maclaine's The End in the mid-1950s, and appreciated the unique merits of this unusual, raw, rough-edged effort. In the early 60s, he sought out Maclaine, who by that time had begun a long mental decline, apparently due to amphetamine use. He found Maclaine living in a run-down San Francisco apartment, a single room accessible only through its window because it had no door. Brakhage wanted to make Maclaine's films available, but Maclaine was very suspicious at first. Brakhage had to cultivate a difficult friendship —a knife was thrown, and not by Stan — over several months before Maclaine delivered the originals of his films to Willard Morrison, an executive with what was then called Audio Film Center, who advanced the money for making prints and put them into distribution.

It seems probable that if Brakhage had not liked The End, all four of Maclaine's films would have been lost forever. But today, another generation has discovered it; I know of more than one young filmmaker who counts The End as one of the half-dozen most amazing, and influential, of films.

Now I wish to make clear that I consider the Motion Picture Section of the Library of Congress one of the finest of our institutions dedicated to film preservation. It's a great resource; I've used it several times myself. But, like any institution or individual, it can have its off-days, and the day that some of Brakhage's Arabics arrived for copyright must have been one of them.

Brakhage began copyrighting his films in the early 1970s. The Library, as was their legal right, virtually always requested one print of each film for their collection, which Brakhage was required to supply at his expense. As a result, they have much of his work preserved and available for viewing.

With the Arabics, Brakhage attempted to push his use of abstracted imagery even further. No longer was he making metaphors for things he had seen; rather, he was trying to make images that he had not seen before. The result is a series of films whose shifting lights and constantly-changing spaces don't look much like conventional compositions. Ironically, the person who evaluated the prints Brakhage sent in wrote him back that they could not be accepted for copyright because there was no way of telling if they were original works or not. Apparently they seemed indistinguishable from the random waste products of a lab, a view which is in fact understandable from someone unfamiliar with Brakhage's aesthetic. Thus those particular films are not in the Library's collection, though they do remain available for rental or purchase.

While I try hard to get the facts right in my own writing, and am pleased to be called a "film scholar" tonight, I want to make clear that I do not believe in the idea that film scholarship is in any way objective. The choices of what to write on and how to write on it inevitably involve value judgements. And that is how it should be: film, like any art, has as its primary task an interaction with each viewer's subjectivity.

My own first introduction to cinema came in 1963, when I was 15. Robert Edelstein, a close friend then and today, read one of Jonas Mekas's enthusiastic columns on an avant-garde film, in this case Gregory J. Markopoulos's Twice a Man, a film that now raises its own serious preservation issues. It was being shown silent then, in an effort to raise money for the soundtrack. My friend went, liked it, told me about it, and we went together. I was, to use today's lingo, totally blown away. Its incredibly beautiful liquid colors and its time-crossing form were unlike anything I had ever seen, and I understood for the first time that light could be organized with the same precision and intensity as words in poetry, or sound in classical music. I had the feeling that such films could change others' lives; perhaps naively, that such films could change the world. Within a year and a half, some friends and I had started the M. I. T. Film Society, and my first writing on film consisted of program notes for our shows.

While I hope my writing offers useful information about a film in addition to suggesting possible interpretations, I also write at length just about only on films that have moved me deeply, and changed the way that I see and think, trying in the writing to stay true to the passion and pleasure that those films have offered me. I guess in some ways I remain a 60s kid, thinking that art can enrich our consciousness. And indeed, that idea is also behind the work of many filmmakers across the decades.

In 1975, I gave a paper at an academic film conference at Harvard. A respected professor from the State University of New York at Buffalo repeatedly lit into it, using terms from the newly-emerging European-influenced film "theory." Eventually I replied in frustration, "Look, all I'm trying to do is write from my own subjective experience." He replied, "That's what Descartes tried to do, but he was proven wrong by Freud and Marx."

I was too baffled then by this particular view of the history of philosophy to know what to say, but I'd like to take this opportunity to answer him tonight. While I don't think that aesthetics are ever a matter of proving things right or wrong, even if someone considers my whole project "proven wrong," that really won't matter to me if along the way I can offer some real insight into cinema, help bring some viewer to a deeper appreciation of and understanding of a particular film, and offer some evidence that the films I write on are also films that I love.