Home    Film   My Art    Art     Other: (Travel, Rants, Obits)    Links    About    Contact
This review of the films of Chris Welsby argues that his films propose a redefinition of the relationship between humans and nature, abjuring the usual alteration and dominance by taking part of their forms from natural processes such as the wind and the movement of clouds, consciously surrendering some degree of control. The review is also available on the Chicago Reader Web site, in the form that it appeared in the print version of the newspaper [I do not choose my reviews' titles!], in the issue of April 13, 2001. I have added links and frame enlargements to this version on my Web site. Fred Camper

Films by Chris Welsby By Fred Camper Many artists incorporate growing or decaying plants in their paintings, sculptures, and installations, ceding some of their decision making to natural processes. But the analogous tradition in cinema is much skimpier, perhaps because the filmmaking process is so industrial, beginning with a mass-manufactured strip of chemicals on plastic, then proceeding through more machines and photochemistry. Still, Stan Brakhage collaged bugs and plants onto strips of clear film in his 1963 Mothlight, and Tony Conrad made food-encrusted strips (only some of them projectable) in the 70s.

Chris Welsby's approach is less physical: he makes landscape films whose framing, camera angles, or edits are triggered by the sun, wind, or tides. The resulting images and rhythms are often quite beautiful but never smooth or predictable, lacking the predigested quality found not only in Hollywood movies but in many poetic films. These are not about getting sucked into a story or being captivated by artist-made abstractions. Instead his films not only contemplate nature — watching the clouds or the tides — but reflect on cinematic mechanisms as a metaphor for industrial civilization. Can our machine-made world enhance our experience of nature? Or are we irretrievably alienated from it by our own creations? Welsby's six works at University of Chicago Doc Films on April 15 — his first one-person show in Chicago in over a decade — pose these and other questions.

Born in England in 1948, Welsby grew up mostly in rural areas; his family had a large garden with trees and a stream when he was very young, he told me, and when he was about ten they moved to the southern coast, where "all of a sudden there were river estuaries to explore." Welsby began building boats and eventually raced sailboats. (Later he saw "the task of sailing from A to B, which you can only do by working with the winds and tides, as a metaphor for a film.") In his mid-teens, long before discovering cinema, he began painting landscapes. Cézanne was "a major early influence" because of the tension he created between depiction and foregrounding the materiality of paint. Welsby discovered photography in art school and began to experiment with moviemaking while working as a deckhand on a ferry, where he noticed constant changes in the light, winds, and tides. An encounter with filmmaker Paul Sharits not long after was Welsby's first exposure to avant-garde film; today he names Sharits, Malcolm Le Grice, and Peter Gidal as key influences.

These three are curious choices: their abstract or semiabstract works are different in many ways, but all assert film's materiality. At first glance Welsby appears to be using film as a window onto nature, but in fact all his works also acknowledge the properties of his medium. The earliest film on the program, the five-minute Fforest Bay Two (1973) [an early version of this film is lost, hence the "two" of the title], was created from single frames taken at various intervals, and the resulting speeded-up, jerky motion reminds one of cinema's mechanisms. Taken at high tide, then low tide, on the shore of a bay, these frames came from a camera that rotated 360 degrees in a series of eight short bursts. On the one hand this provides a feeling of completeness, a hint of the roundness of a sphere; on the other, the views seem partial and arbitrary, especially in comparison to the globe they imply. Welsby began with views of only one frame, then added a frame with each rotation, up to 30, calling attention to cinema's fundamental 24-frames-per-second rhythm; gradually the images resemble a film in fast motion. At 30 frames per view, the camera was relocated from the high-tide line to the low-tide line, and the film's shot lengths were systematically reduced until they were single frames again.

For Tree (1974), Welsby tied his camera to a tree branch during a strong wind; he'd planned an 11-minute film, but the camera malfunctioned and the usable portion was 4 minutes. The wobbles of the frame as the branch moves dominate the movements of grass and branches within the frame: the viewer becomes profoundly aware of how much the act of framing conveys dominance and control — though here the agent is the wind.

In the 20-minute Seven Days (1974) Welsby finds his mature voice, offering a tour de force unlike anything cinema had yet 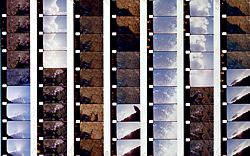 seen. He took one frame of a Welsh landscape every ten seconds for a week, with the camera anchored to the same spot — though it did swivel. Placed on an 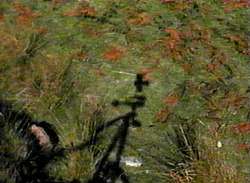 equatorial mount (used in astronomy for photos of stars), it followed the sun across the sky. Moreover the camera flipped back and forth between two positions governed by the sun's visibility: when it was out, the camera turned 180 degrees from the sun (and the frame includes the camera's shadow moving across the land), and when the sun was behind clouds, it pointed straight at the sun. 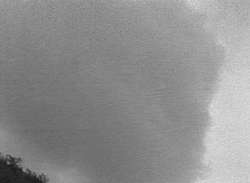 What might sound like a gentle observational film seems to me quite violent. The wind roars on the sound track; clouds streak by almost apocalyptically; the camera flips back and forth for no obvious reason. On close observation, though, one can usually anticipate these changes by noticing 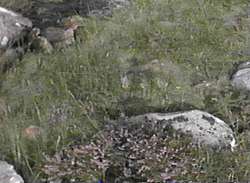 a hint of sun behind the clouds or the land darkening: it's possible to see the natural "cause" of each cut in the preceding shot. This is a film that rejects the long tradition of landscape painting (and much subsequent landscape filmmaking) in which images serve as metaphors for the artist's emotions. Instead viewers are invited to bring their own responses to this enjambment of nature and the machine.

The camera's movement in Seven Days reveals a tiny stream, a group of flowers, some distant ridges. This is not a landscaped 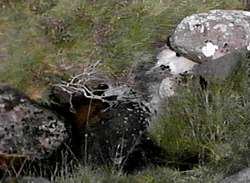 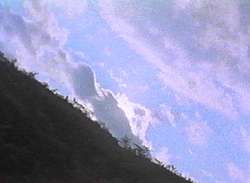 garden but a random assemblage of natural objects with an unordered beauty, a beauty the viewer must discover. (Welsby counts John Cage as another influence.) The film's rough edges and jittery, speeded-up rhythms seem calculated to express both the protean side of nature (the changing weather is apparent not only in clouds but in raindrops on the Plexiglas Welsby 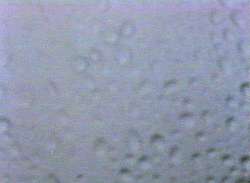 placed in front of the lens to protect it) and the violent, mechanical motion of the mechanized tripod. Just as sailing involves learning to work with the tides and the wind, the mechanisms of filmmaking can be brought into sync with nature's forces. Ethics and aesthetics come together here, as Welsby suggests that filmmakers let the clouds do a little editing.

Estuary (1980) — at 55 minutes Welsby's longest film to date — was made more simply. Mounting his camera in a small boat anchored in a river mouth he sailed as a boy, Welsby recorded ambient sound and took a series of images about four seconds long every 15 minutes over three weeks, showing other boats, water, and the flat shore; the compositions were determined by the boat's random rotations. Sometimes shots are continuous, sometimes 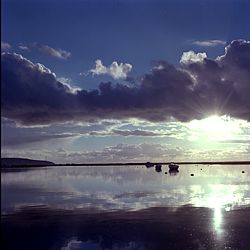 discontinuous, and the boat often moves within a shot.

Estuary seems a fuller realization of the transfer of control also evident in Tree. The greater length is important, because in some sense the viewer is supposed to get bored. But eventually one focuses on changes in light, position, and motion, which leads to a sense of the film's space as profoundly unpredictable and unstable. At the same time, as in so many of Welsby's films, there's an implied 360-degree view, with the global, spherical feel of the planet itself. Like Seven Days, this film is true to the interdependence of humans and nature, an idea at the core of ecological thinking; indeed, Welsby names Gregory Bateson (author of Steps to an Ecology of Mind) as another important influence. While the other stills accompanying this review
are video captures of actual frames (except for
the images of strips of Seven Days), this still
is not a frame enlargement. Welsby writes, "It's
from a 2 1/4" x 2 1/4" negative. These stills
were for the installation version of Estuary.
Each one is a record of what the movie camera
was pointing at at set intervals in the day."

Many years ago I swam a very slow mile, all sidestroke, across the mouth of a calm bay in the Caribbean. After a while the regularity of my movements and of the waves produced a sort of visionary seizure: I felt a total loss of will, as if whatever agency was causing me to swim were also creating the waves. At the same time, I remember telling myself not to let this feeling go too far — I didn't want to swim out to sea. Estuary is the only film I know that recalls this experience; while it never loses sight of film's materiality, it still leaves one feeling utterly immersed in nature.

Welsby abandons nature-driven procedures in the two most recent films on the program. The 26-minute Sky Light (1988) begins with lush, almost slick dissolves of nature images — reflections in water — so beautiful they approach the syrupy. Then natural sounds yield to mechanical ones — a short-wave radio, for example — and we see the sky interspersed with bursts of 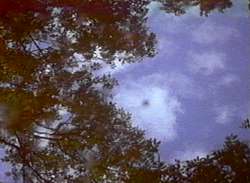 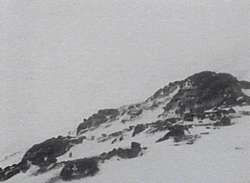 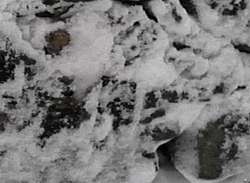 light; soon we see desolate snowscapes. The disquieting feeling is that nature is being interrupted or frozen for no apparent reason.

Welsby started filming SkyLight soon after Chernobyl blew in 1986. A new father living in Great Britain, he stood "under the drizzle thinking, `That isn't safe anymore.'" Abandoning his teaching jobs, he spent a year roaming Great Britain, shooting the film and behaving so "irresponsibly" that his marriage fell apart. Echoing Adorno's famous dictum that "after Auschwitz, it is impossible to write poetry," Welsby declared after an early screening of the film, "It is not possible to look at landscapes in the same way after Chernobyl." The next year he moved to Canada, where he lives today, teaching at Simon Fraser University in Vancouver.

The 17-minute Drift (1994), Welsby's most recent single-screen film (he's since been making gallery installations), "had to do with memories of being lost in fog at sea and being an immigrant to another country." It's curious to hear emotional justifications for his work, but the film's imagery remains true to the idea of losing oneself in nature. Huge freighters on a misty sea just off Vancouver are often seen near a barely distinguishable horizon line, mysterious beasts that represent the only firm anchors 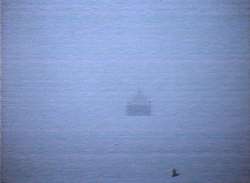 for the eyes in an undefined field — metaphors in a way for the act of framing. The camera's searching, almost random pans also echo Estuary.

In his note on the film Welsby mentions that the ships seem to dominate the seascape during clear weather and blend into the sea when it's misty. It seems our constructions — including Welsby's films — can be at once monuments to human achievement, violent intrusions into the natural order, and shadows that dance alongside nature.

Related Links:
An email discussion about films organized around ecological principles
Lecture on "Nature and Cinema"